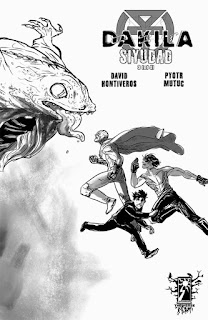 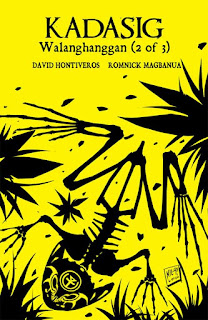 Hopefully you've already ordered and read these new releases and are here to check out this OotG post for some additional insight into these issues.

If you haven't read these issues yet... you have been warned.

I’ve mentioned this elsewhere: the fact that the 3 separate stories that were worked on by their respective artists during lockdown in TFNY 2020 (the DAKILA “Siyudad” story arc, the KADASIG “Walanghanggan” story arc, and the one-shot “That Kind of Hunger” for TRESE: BLOODLINES Volume 1) were all about greed, was one of those random intersections of circumstance.

What wasn’t random though, was the work that went into the “Siyudad” and “Walanghanggan” scripts.

The “Walanghanggan” scripts came first, and it was, in fact, during the writing of them, that I realized I could very well launch into another title, one that would be decidedly more spandex superhero-ey than KADASIG was.

That title, of course, became DAKILA.

And as I started to write scripts for DAKILA, the idea for the “Siyudad” arc came.

Among other things, “Siyudad” serves to encapsulate some of the conflicted feelings I have towards Makati being a center of commerce.

Because sadly, where commerce is, greed isn’t too far behind…

Clearly, there was the narrative connective tissue between the two arcs, since the DAKILA and KADASIG backstories bleed into each other (as we see in the “Walanghanggan” arc).

But, there was also clearly some serious thematic connective tissue, with greed being central to both arcs.

So a number of conscious creative decisions were made in the course of writing “Siyudad” that would serve to mirror certain aspects of both arcs, in turn reinforcing each of the narratives taking place in those arcs.

Certain creative demands resulted in both arcs featuring an analogue/stand-in for Masakim/Greed, instead of the Real McCoy.

And since the frog is the animal associated with Greed, in “Siyudad,” we have the thus far unnamed frog thing that rose from the diabul swamp in issue 2, and of course, in “Walanghanggan” issue 2, we have the giant yellow frog (one of the “myriad forms” of Masakim disciple, Lester Arkadio).

Now, when it became clear that “frog” was going to be a central element in “Walanghanggan,” and the narrative had organically moved towards the plot point that Kadasig would be forced to transform himself into the fictional Filipino superhero he once played onscreen, I could not escape the undeniable fact that the key elements “Filipino superhero” and “frog” were in such close proximity to each other.

It would not take very much to add “battles” and “giant” to those elements, so I could honor the venerable “Filipino superhero battles giant frog” convention.

It was an opportunity I could not afford to let pass.

Which is why we end up with a giant yellow frog in “Walanghanggan.”

There was also, as I mentioned above, the conscious decision to mirror certain aspects in both arcs.

Thus, we have the hero actually held captive inside the Masakim analogue, calling back to the visual of Greed as a hollow thing.

In “Walanghanggan,” the hero is tortured* for an indeterminate amount of time, but in “Siyudad,” the “Greed is forever hollow, no matter how much stuff you throw into it” idea is taken a step further, as the analogue actually uses the hero’s own life force to power itself.

All we see is what appears to be a hollow rib cage, without any internal organs.

In a fundamental sense, the hero--trapped in its rib cage; get it? Rib cage?--becomes the analogue’s internal organs, their own strength, power, and life force forced to flow throughout the analogue’s body.

The hero himself becomes the analogue’s beating heart.

But still, the analogue desires more…

I could go on, but maybe let's leave it there for now...

In the meantime, if you haven't gotten your copies of these new releases and still read this spoiler-y post, then please click on down to the Indies section of the Avenida website so you can do just that, and then see what it is I'm blathering on about here...

That should be all for now, all you mighty fine folk out there…

* Subjecting the hero's super-hearing to a super-noise barrage of giant frog borborygmus was my own spin on PSYOP warfare sound torture...

Click on down there to support self-published local comics.