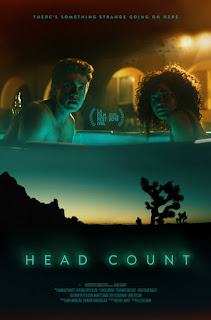 A HISJI is a vengeful thing

five times its name you never sing
with skin pale white and eyes of green
it’s something you’ve already seen.

Taking the urban legend horror trope of that extra someone/something tagging along with a group of unsuspecting soon-to-be victims*, Elle Callahan’s** feature directorial debut, Head Count is an effective paranoiac horror-thriller that sees Evan (Isaac W. Jay) visit his older brother Peyton (Cooper Rowe) out in Joshua Tree.
The trip of course, soon veers into horror movie territory after Evan joins a group that the brothers meet while out on a hike, and unwisely reads a random story found on anonymousnightmares.com.

Moral of this story?
The Internet can be a very dangerous place… so do NOT, under any circumstances, just read off some random bit you find on a website you are not familiar with…
Ugh.
Kids today…

Who is the third who walks always beside you?
When I count, there are only you and I together
But when I look ahead up the white road
There is always another one walking beside you
Gliding wrapt in a brown mantle, hooded
I do not know whether a man or a woman
—But who is that on the other side of you?
--T.S. Eliot
The Waste Land

* I like to think of that trope as the 21st century Creepypasta take on T.S. Eliot’s “Who is the third…?” thus, the seemingly rando appearance of the above quote here.

** Callahan also executive produces, handles (the excellent and unnerving) sound design, and is credited for the story, along with Michael Nader, who wrote the screenplay.